Britten’s The Turn of the Screw is not obvious festival fodder. It’s mysterious and often uncomfortable narrative does not sit easily alongside picnics on a warm summer evening, but when carried through as well as this there is little room for doubt it is a masterpiece and masterly done.

Christopher Oram’s design is the key to the whole. The vast, rusting structure seems to have a life of its own. Panels move by themselves, not unusual in stage sets, but then the vast doors open as part of the naturalistic story-telling without anyone touching them. It is unnerving and totally in keeping with the development. By the second act the floor has collapsed – creating an almost Poe-like sense of the end of everything – and the water seems to be rising to drown everything above it. 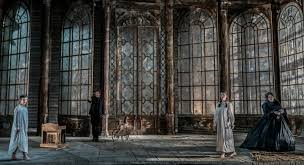 It is difficult to see why Sophie Bevan’s immensely impressive Governess finds the place attractive and we are led to believe right from the start that she is not totally in her right mind. While nothing extrovert happens sexually there are many uncomfortable hints in Louisa Muller’s production of child sexualisation. Miles – superbly understated by Leo Jemison – takes the Governess’ hand to lead her and calls her My Dear in a way which seems far too adult for us. Elen Willmer’s Flora is equally chilling when she suddenly puts the ball under her apron to look pregnant and later drowns her doll like a new born child.

Kathleen Wilkinson’s Mrs Grose tries to bring some sort of sanity to the situation but fails to make any impact against the very real strengths of Ed Lyon’s seductive Peter Quint and the passion of Katherine Broderick’s Miss Jessel.

It is amazing what Britten achieves with just thirteen instruments in his ensemble, and the members of Garsington Opera Orchestra were at their individual best under Richard Farnes.

After such a galvanising evening it was something of a come-down to encounter Offenbach’s Fantasio the next night. The work is virtually unknown today and it did not take long for us to realise why. Though a favourite of the composer it is relentlessly underpowered and there are few tunes which come anywhere near the impact of his finest compositions. Huw Montague Rendall made a strong impact as the Prince of Mantua and his Cunning Plan song was one of the few memorable items across the whole event. Jennifer France demonstrated fine coloratura as Elsbeth but her character is so flat as to be less than two dimensional – which was not her fault and was really a waste of a positive singer. There were many smaller parts but none given anything of real interest to sing. Even the name part of Fantasio, though intelligently performed by Hanna Hipp, has little engaging music, including the Moon aria close to the start. 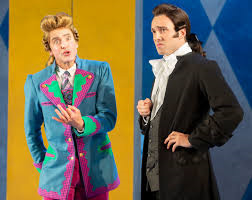 The chorus enjoy themselves and their A lovely day reminded me of the auto-da-fe scene from Candide. Then I realised that Jennifer France would make a perfect Cunegonde and began wondering how much better the evening might have been if this splendid cast had actually been giving us the Bernstein rather than the Offenbach!

Over the last thirty years Garsington Opera have given us so many wonderful evenings, and enduring memories, that one can easily forgive the occasional blip. We already know that next year brings Mitridante, Fidelio, Un Giorno di Regno and Rusalka. Dates are available for the whole season at www.garsingtonopera.org