Whether by accident or design, I know not, but Hastings Philharmonic’s choice of Christ Church St Leonards for their performance of this later work of Rossini’s, Petite Messe Solonnelle couldn’t have been more fitting.  The background of this ornate church, with imposing altar beneath the colour of the stained glass east window and frescos gave Rossini’s singular religious work its proper setting. 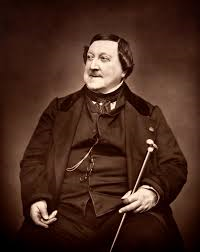 Before the performance, as the choir filled their places, I wondered about the positioning  and its effect on the balance of sound. The tenors were to the immediate left of conductor, Marcio Da Silva, with the basses opposite, on his immediate right.  The ladies were around and to the front of him,  the three instrumentalists placed within the arc the choir formed.  However, any concern I had was blown away within the first few bars of the choirs opening Kyrie.  It was beautifully and arrestingly sung.    The balance was absolutely right and the choir maintained that equilibrium throughout the performance.  I was very much impressed by the choirs’ attention to dynamics.  Much of the work requires choir and soloists singing separately but within the same piece. These were performed particularly beautifully, expertly and seemingly  effortless.   Marcio Da Silva’s direction and conducting certainly draws the best from choirs and performers.  What was most impressive to me was that the men, few in number – 9 tenors and 8 basses – were heard as strongly, as softly, as effectively and harmoniously as the outnumbering women.  Well done men!

The soloists were superb. Tenor, Alberto Sousa, sang  Domine Deus magnificently.  Themba Mvula’s deep baritone gave  Quoniam an excellent rich quality.  The Crucifixus and O Salutaris were sung by Soprano Helen May beautifully and faultlessly.   Of the Soloists, the highlight of the evening was the duet Qui Tollis where Helen May was joined by mezzo-soprano, Beth Moxon; it was enchanting to hear and watch.  I particularly liked Albert Sousa’s expressive engagement with the music and singing. It gave an operatic element which Rossini would have approved.

Of course, the musical accompaniment of this work is distinctive. Though it can be described as ‘lumpy’ it must require much concentration, artistry and expertise.  Frances Rayner, piano, Petra Hajduchovia, harmonium, and Stephanie Gurga, chamber organ, managed all these and more.   I have heard the Preludio religioso described as ‘odd’; but their rendition was remarkable by their superb artistry.

Apparently, Rossini said that he composed this piece con amore.  It was encouraging and delightful to hear and see that all involved put this performance together with that same love.  A hugely enjoyable evening. Thank you.