The new season opened in a blaze of warmth and power with Chabrier’s popular Espana. The large orchestra – close to a hundred players – were essentially there for the Strauss in the second half but it made for a large scale and highly extrovert reading of a work too often heard simply as background music to other activities. 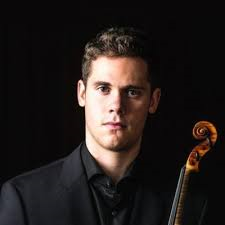 If the rest of the evening was less familiar it was none the less welcome. Callum Smart was the soloist in Korngold’s Violin Concerto. If this is not a work which comes immediately to mind when one thinks of the concerto repertoire it certainly has considerable appeal, even though the opening is stark and often feels remote. The odd flashes of warmth display the cinematic origins of the score as does the gentle romanticism of the slow movement. The finale is all bluster and fire, with lurking pirates and historical romances hidden beneath the heroic dances and fanfares. Callum Smart’s warm sense of engagement almost convinced us it was a great work.

After the interval we had Strauss’ Ein Heldenleben released upon us in all its magnificent opulence and virility. Strauss uses the vast panoply of forces at his command to milk both the tonal and emotional palette, and frequently overwhelms with the sheer level of volume – no wonder the orchestra need the new protective shields. Yet within this score there are many hauntingly beautiful moments and many passages of fine solo playing. This highlights a somewhat strange dichotomy within the programming. The solo violin part, admirably played by guest leader Andrew Laing, is effectively a violin concerto in its own right, so that we ended up with two lengthy violin solos by two fine violinists. All very much to our benefit but unexpected if you were not ready for it.

Throughout Brian Wright had galvanised his large forces with tact and skill, particular in the rabble-rousing passages in the Strauss which raised the hair on the back of your neck.

We are on more familiar ground on 30th November when John Lill joins the orchestra for Brahms’ 2nd piano concerto, plus Schumann’s 4th symphony and Beethoven’s final overture for Fidelio.