A cornucopia of classics from the Brighton Phil 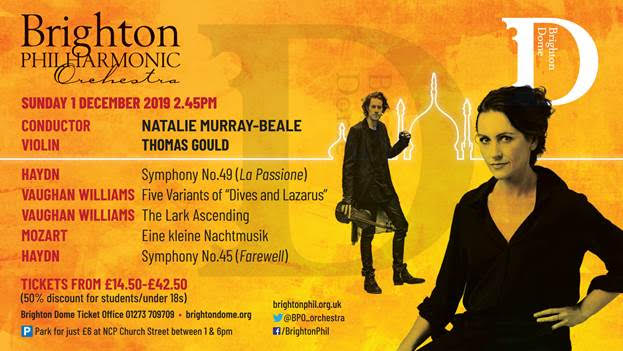 Our second concert of the season takes place on Sunday 1 December with a beautiful programme of Vaughan Williams and Mozart, framed by two of Haydn’s deepest and most sonorous symphonies, La Passione and the Farewell Symphony.

We are delighted to welcome the Australian born conductor Natalie Murray-Beale to Brighton. Natalie, a BBC Performing Arts Fellow in 2015, was selected by Dallas Opera for their inaugural Institute for Women Conductors and is currently Creative Director of Independent Opera at Sadler’s Wells.

She says: “I am so looking forward to performing with the Brighton Philharmonic at Brighton’s beautiful Dome. A great highlight is being joined by the wonderful soloist, violinist Tom Gould. He plays with such soul and creates the sweetest sound. This will be very special.

The Lark Ascending evokes something much deeper than simple, lyric bird song. Full of improvised calling, memory, nostalgia and a deep sentiment that is hard to express in words, it could be depicting human longing, the earth or a feeling of soaring high about the world. Like so many masterpieces, it will resonate uniquely with each person who hears it.

There is a beautiful line from the Meredith poem that inspired The Lark: ´Extends the world at wings and dome’. How perfect to be performing it here at Brighton Dome.”

Thomas Gould writes: “I am delighted to be making my debut with the Brighton Philharmonic Orchestra with a piece very close to my heart, Vaughan Williams’s masterful requiem to an age of pre-war innocence, The Lark Ascending.” His 2015 recording of the piece garnered rave reviews – such as this from Gramophone Magazine “Gould soars aloft with effortless grace, tenderness and fragrant poetry.” Thomas has an unusually broad repertoire that includes many contemporary works and in addition to his many international solo appearances he is leader of the Britten Sinfonia, one of the world’s most celebrated un-conducted ensembles.  The title of Five Variants of “Dives and Lazarus” may not be familiar, but the music probably will be; this gem for strings and harp is based on folk tunes collected by Vaughan Williams in East Sussex, with glorious string writing in its sweeping melodies.

Another Classic FM favourite is Mozart’s Eine kleine Nachtmusik, the German title meaning “a little serenade”, often rendered more literally, but less accurately, as “a little night music”. Written whilst Mozart was composing his opera Don Giovanni, this string serenade was actually not published until well after Mozart’s death.

The concert closes with Haydn’s Farewell Symphony, perhaps best-known because of the circumstances of its composition. Court composer Haydn, under pressure from his orchestra, was slyly appealing to their employer, Prince Nikolaus Esterházy, to allow the court musicians to return home to their families after a particularly long season at his remote summer palace. In the final movement the players left the stage one by one, snuffing out their candles, until only two violins and the conductor remained. History records that the Prince took the hint and the court were allowed to return home the next day!