Anthony Minghella’s production of Madam Butterfly has returned for a seventh time and it is a tribute to its many strengths that it appears as fresh and beautiful as it ever was. Add to this excellent singing and consummate acting, and the evening could not fail. 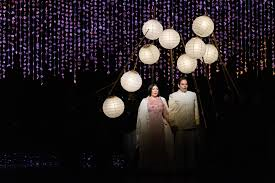 If Dimitri Pittas’ Pinkerton seems an outsider this is certainly in keeping with the work. He may return older and wiser but he is still from another world, unlike Roderick Williams’ world-weary Sharpless, adding to his increasingly impressive list of character parts with one of his most subtle yet. The edgy tenor of Dimitri Pittas, at its most mellifluous in the act one love duet, is a fine contrast to Roderick Williams’ rich baritone with absolute clarity of text at all times.

It was difficult to believe that Natalya Romaniw was singing Butterfly for the first time as the role fits her like a glove. No western singer can bring a visually convincing Japanese teenager to the stage but she moved us throughout with the dignity and innocence of her performance, coupled with heart-melting moments in her lyrical outpouring. Her One fine day was stunning in its intimacy with Suzuki before it opened out into a rich statement of faith. 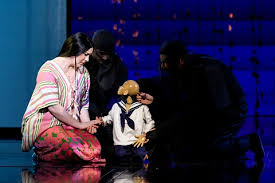 The rest of the cast were drawn from strength with Alasdair Elliott a more up-market Goro than usual, Njabulo Madlala a sympathetic Yamadori and Keel Watson an imposing Bonze. Stephanie Windsor-Lewis as Suzuki is not given a lot to do in the production as the black suited crew move everything that needs moving. However, her voice matches Natalya Romaniw’s with ease, making the flower duet a significant moment. The chorus don’t have a lot to do but look beautiful, which they do with ease, and sang will equal beauty. The orchestra under Martin Fitzpatrick were crisp and alert, with exemplary balance given that the singers were kept to the front of the stage for most of the evening.

Anthony Minghella’s production has so many lovely moments it is difficult to pick just a few but on this occasion the lanterns in the love duet were wonderfully gentle, and the puppet for Sorrow is surely the finest way to do the child. He is on stage far longer than is normal, shows a range of emotions way beyond most child actors and never becomes embarrassing. It is masterly.

This may be the seventh revival but I suspect it will not be the last.