I was due to review the premiere of David Sawer’s opera at Garsington in 2018 but a major accident on the motorway meant I was stuck for four hours and so did not make it; all the more enjoyable then to be able to catch up with it via YouTube during the lockdown.

Rory Mullarkey’s libretto is based on the novel by Roberto Bolano but uses a different narrator in each of the three acts to move the narrative forward. This helps to speed up the story line but also gives us a different emotional insight into the characters. At a basic level the tale is quite slim. A potential Olympic figure-skater has lost her grant and has nowhere to practise. A local government official manages some slight-of-hand with local finances to pay for an underground skating rink so that she can practise. Alongside these events, a night-watchman, Gaspar, is trying to protect two travellers whom the mayor wishes to eject from a campsite. The various characters interweave with each other, and it is only in the final bars that it is revealed that another traveller, the alcoholic Rookie, is responsible for the murder of Carmen in the ice-rink.

The three male protagonists lead each act, though the principal characters emerge only slowly. The first act focusses on the young Gaspar, sensitively sung by Sam Furness, and his relationship with two female travellers, Carmen and Caridad. His love for Caridad quickly becomes clear though he is more concerned with her welfare and the town’s desire to get rid of her. The older traveller, Carmen, is strongly played by Susan Bickley who quickly establishes the complexity of the character and her ever-changing relationship with the world around her. Claire Wild’s Caridad is a damaged personality, especially moving when she finds Carmen’s body on the ice. 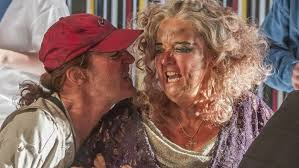 The businessman Remo, sung by Ben Edquist, is a smooth operator but in the long-run he is the one character who really loses out. His fling with skater Nuria does not last and he is left sad and somewhat isolated at the end. Even as narrator of the second act he seems to be a loner.

Enric, the civil servant who fiddles the books to run the ice rink, is a fine creation from Neal Davies. His emotional turmoil is beautifully crafted and it seems fitting that, by the end, Lauren Zolezzi’s skater Nuria has abandoned Remo for the older but far more reliable Enric.

The dark horse throughout is Alan Oke’s wonderful Rookie. Besotted by Carmen, but most of the time too drunk to be in control of himself, he eventually owns up to her murder simply because he could not have her.

There is a small chorus, who are clearly individualised, and a splendid pairing for Nuria with the real figure skater, Alice Poggio. Stewart Laing’s direction is crystal clear and his setting – including the ice-rink which is fully functional yet safe for ordinary walking – made up of packing cases and plastic furniture, is absolutely right for the sense of constant transition which underlies the life of all the characters.

David Sawer’s score is not afraid to write extended arioso passages for the main characters, all of which work extremely well and there is a natural flow to the whole work. Garsington Opera have a real success here. I would very much like to encounter this again – hopefully live next time.