All credit to Oxford Lieder Festival and its director, Sholto Kynoch. The Song Connections series is informative and intelligent without being heavy or dry.

Mendelssohn’s grandfather, Moses Mendelssohn, was an 18th century philosopher. Under the tolerant polices of Frederick the Great in Prussia he became a leading Enlightenment thinker who wanted Jewish people to be fully assimilated into the community, their talents recognised and valued. Soon there were schools for both boys and girls, mixed marriages and conversions. We learn all this from Philip Ross Bullock in Oxford, Avi Lifshitz at the Jewish Museum in Berlin and  Martin Holmes at the Bodleian Library. 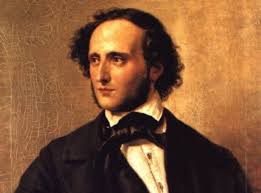 Short talks are interspersed with some very fine renderings of Mendelssohn songs by Magnus Walker, tenor, and Gus Tredwell, piano. Working in a mahogany panelled room at the Bodleian and surrounded by portraits of academics, they work sensitively together. The high spot in their mini-recital is Glosse in which they find anger and despair along with delicate lyricism. Walker has an impressively rich tone and I really liked the musical rapport between the two of them.

Of Moses’s six children, only two remained in the Jewish faith. Two converted to Catholicism and two – one of who was Felix’s father, Abraham – became protestants. Felix and his siblings were all baptised and his wife Cecile Jeanrennud was the daughter of a protestant pastor. Thus the composer – who famously revived Bach’s strongly Lutheran St Matthew Passion (Berlin 1829) – looked both ways, culturally because he also had his grandfather’s writings translated.

Most of Mendelssohn’s musical manuscripts are in Berlin but much of his other writing and drawing is in the Bodleian thanks to Oxford resident Margaret Dineke who inherited the archive from a friend who’d known the composer. It was eventually bequeathed to the Bodleian by her sister in 1973. Loveliest of the collection is an album of music, painting and writing Mendelssohn assembled as a honeymoon gift for his wife. As one viewer dubbed it in the Q&A which followed the event: “the nineteenth century equivalent of a mix tape.”