GARSINGTON OPERA’S THE TURN OF THE SCREW WINS RPS AWARD

Garsington Opera’s 2019 production of Britten’s opera The Turn of the Screw has won the Opera and Music Theatre section of the 2020 Royal Philharmonic Society Awards.

The jury’s citation read: ‘This spine-tingling, stylish production was a class act. It was perfectly conceived for its setting as twilight fell, and showcased a gratifyingly inclusive cast and crew, all delivering at the very highest level.’ 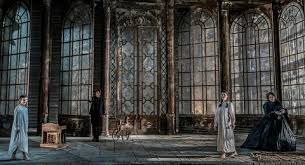 The award was open to all opera activities taking place in the 2019 season in the UK and the winner was chosen by a panel of specialists. The cast reacts to the news of the award in this video here: https://youtu.be/R4MnvK_AelE

Douglas Boyd, Garsington Opera’s Artistic Director, said: “All of us at Garsington Opera are so proud of this production, and we’re over the moon that we’ve won this award. In this year when we must celebrate the performing arts more than ever, we’d like to dedicate this award to everyone who works in the amazing world of opera. We’re all winners.” A highlight of the 2019 Season, this production of Britten’s masterpiece was acclaimed by 5-star reviews in the press and a hugely enthusiastic audience response.

It featured a starry British cast and was enhanced by stand-out debut performances by the children playing Miles and Flora – among the most challenging juvenile roles in the whole operatic canon. Cast and creative team:

A filmed version of a live performance was shown on BBC iPlayer in the summer and can be seen on our YouTube channel until 19 December. Click here to watch the opera Garsington Opera is also delighted to announce that Louisa Muller’s award-winning production will be revived in 2022 (cast and full creative team to be announced).