Birmingham Symphony Hall has been my favourite concert venue since it first opened and it was a pleasure to sit in on a digital concert with the CBSO, and some of my favourite composers. This was the third digital concert, given over this time to Brahms and Mendelssohn, with the works becoming increasingly unfamiliar as the evening progressed.

Brahms’ Academic Festival Overture has been a favourite since I studied it for O level. One of the unexpected benefits of lockdown is that I was able to sit with my laptop, head phones on, and sing Gaudeamus igitur at the top of my voice at the end – with nobody to complain and Sally not digging me in the ribs to keep quiet! 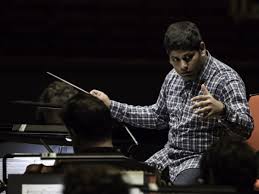 Conductor Alpesh Chauhan brought a freshness and vitality to his conducting which continued into Mendelssohn’s first piano concert with Stephen Hough the engaging soloist. He knows the work well and his technical finesse and sparkling articulation brought the work to scintillating life, with fine fluidity in the final movement. There was also some beautiful solo cello work in the second movement.

The final work was Mendelssohn’s First Symphony. Overshadowed by the more familiar later symphonies this one bubbles with life and energy, even the more romantic slow movement and the trio second of the third. The final Allegro con fuoco seemed to sum up the whole performance bringing the attack and angst of sturm und drang together with the romanticism that early Mendelssohn creates.

The symphony hall was entirely empty and the extended platform allowed for comfortable social distancing without any loss of impact or sense of ensemble. As we noted earlier in the year with the BBC in an empty RAH, there are actually some benefits in not having an audience!

More details of ongoing, online events on the CBSO website.